What has Hula-Girls, Hot Fudge Sundaes, and Wrapped Presents?

If your answer was “I dunno”, then you probably never owned a Sega Genesis back in the 90s. As part of the AGES series of releases that Sega have been chucking out on consoles comes ToeJam & Earl, that incredibly difficult yet strangely addictive platformer from your youth (or not).

AGES, for those not in the know, is SEGA backwards. Just kidding, it’s the branding Sega has been putting on re-releases of classic games on the PS3’s PSN and Xbox360’s XBLA. ToeJam & Earl and its lackluster (depending on who you ask) sequel ToeJam & Earl in Panic on Funkotron were both released on PSN and XBLA this month, at $4.99 each on PSN or 800 MS Points for both on XBLA.

In addition to this timeless classic, Sega have thrown in the bonus features of trophy/achievement support, and online co-op. (Because online support on 16-bit games has such a great track record…) 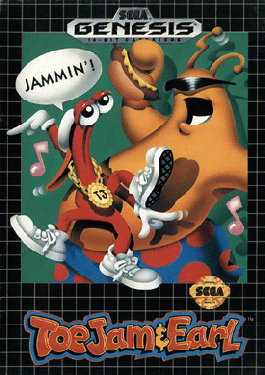 Earl cut the crap and hand me the map

ToeJam & Earl is a difficult game to describe to those who haven’t played it. It is a platformer, but not in the traditional sense of the word. The graphics are a strange overhead isometric mismash reminicisnt of Rogue, and you’ll often find you have no idea where you are going. The levels themselves are (remarkably) procedurely generated, so you can’t bruteforce the game by learning the level plans, either. Canonically the game is set on Earth, but you’ll find that the world you’re in is nothing less than an Escherian nightmare. You take elevators to proceed to the next level, and falling off the map sends you flying down to the previous stage. The longer you spend with the game the more curious you become as to what the programmers were on when they made it.

The objective of the game is to help the two refugee aliens ToeJam & Earl back to their homeworld of Funkotron. After crash landing on Earth, pieces of their spaceship have neatly been sprawled across levels, and it’s your job to find them. Of course, not every level has a ship piece, so more often than not your real objective will be to just survive until you make it to the next elevator.

Survival is no easy task either; every level is a maze, and exacerbating the problem is the fog of war which covers the map. Exploration is key to finding your bearings, but this brings its own problems, as you will find yourself severely outgunned very quickly. Enemies are faster, stronger, and overall more annoying than you could ever hope. Your only line of defense besides running at-an-aggravatingly-slow-pace is to find presents, that hopefully have some item that you can use to your advantage.

It’s not even Christmas yet

Now, that’s not to say that presents are always a good thing. They generally tend to be a mixed bag, and if you are doing okay in the game it’s usually a good idea to avoid them entirely. Why? Well some of them blow straight up in your face and end up draining half your energy or down right killing you. Sure some give you cool items that reveal the map without you exploring it, and some will even teleport you straight to the elevator. But that seems rare, as the opposite case almost always screws you up more than it should do. Add to this your limited number of lives and you’ll become fairly conservative in your play style pretty quickly.

The Good, the Bad, and the Downright Weird

The oddness of ToeJam & Earl in both its play style and its theme was probably what made it stick in our minds for all these years, as going back to it today exposes its flaws in gameplay even more. It’s not a bad game though, and you can still have a lot of fun exploring each stage, and there’s still that element of joy that you get when you open a present and it turns out not to be another sadistic booby trap put there by the programmers to torment you. Playing with a friend also lightens the load somewhat, but even with online support you can bet your hot fudge sundae that everyone who plays this game is going to end up fighting over who gets to play as ToeJam, because lets face it, Earl just flatout sucks.

Re-releases of the little known & obscure light-gun spin-off “Ready Aim Tomatoes” and original Xbox title “ToeJam & Earl III” have not been hinted at. I wouldn’t hold your breath though, earthlings.

With the year of the Dog coming soon, PlayStation Network (PSN) members will get to