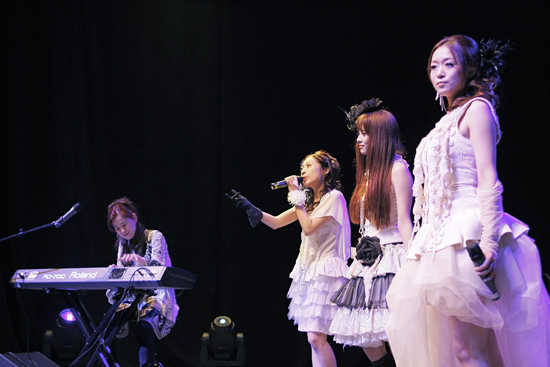 Just 2 days ago on the 6th of April at the Tokyo Dome City Hall, Kalafina held a commemorative release event for their fourth album titled “Consolation”. However, this performance was only limited to the audience in Japan; what about their overseas fans? Sadly, there has not been any news regarding a worldwide concert. Starting on the 8th of June, Kalafina will begin their live tour over 9 different cities of Japan with over fifteen performances for their album Consolation, starting with the Tohoku region. If you’re currently residing or planning to go Japan, this is certainly not something to be missed out!

Kalafina was produced by the talented Kajiura Yuki, many of their singles were well-known anime tie-ins, including “to the beginning” as well as “Hikari Furu”, both which are part of Consolation. Don’t recall which anime it was featured in but sounds familiar? The answer is Fate/Zero as well Puella Magi Madoka Magica the Movie Part II: Eternal . “to the beginning” was used as Fate/Zero’s second season, while “Hikari Furu” was featured in the second anime movie for Puella Magi Madoka Magica.

During its first week of release, Consolation has already snatched the third position on the Oricon Weekly Albums chart (3/18 – 3/24), selling a total of 19,578 copies.

Want to lay your hands on their album? You can order them from CD Japan right now, choosing from the three different editions that they provide. Type A of the limited edition is priced at 3, 800 yen while Type B is priced at 4, 000 yen (both including tax). Both editions contains the audio CD, postcard(s), a booklet, a second disc with a PV for “Yume no Daichi” as well as a documentary featuring Kalafina’s visit at Animagic 2012. The only difference between Type A and B is the disc type – Type A is your standard DVD disc, while Type B is for those who prefer to enjoy the PV and more in a Blue-ray disc.

The standard edition, which only includes the CD, is priced at 3, 000 yen (tax included).

Next Post
Metal Gear Rising: Samuel’s past to be revealed in Jetstream DLC

Keiko Kubota officially leaves Kalafina, group to continue on with Wakana and Hikaru

After some speculation that the group is breaking up after Yuki Kujiura went independent, another

New information released for Pokemon X and Y – Could it be Mewthree?