Incoming: Arc Revolution Cup 5/19 What you need to know 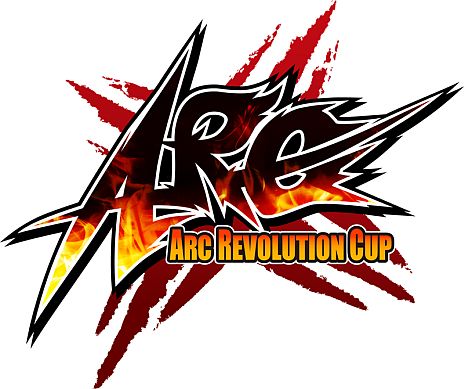 For those of you into competitive fighting games especially anything made by Arc Systems (i.e. Blazblue, Guilty Gear, or Persona 4 Arena), you probably know about the Arc Revolution Cup coming up this Sunday in Yokohama. Players from all around Japan who got past the preliminary regional rounds will be competing in their respective games, aiming to take down their rivals and take home the glory and joy first place. The Arc Revolution Cup will be live streamed on NicoNico as well as twitch.tv along with the Musical Live, Web Radio (Blue Radio H), things that no fan of Arc Systems will want to miss.

Excited for the Arc Revolution Cup but don’t know what it’s all about? Well for those of you who don’t know or want a quick reminder of what exactly is going on, here’s a refresher course.

2. Persona 4 the Ultimate in Mayonaka Arena

– You will not be able to view every match

– Public recordings of the radio will not be available

THE GAMES AT ARC REVOLUTION CUP

The games chosen to be played at this year’s Arc Revolution Cup are Blazblue Chronophantasma (BBCP), Persona 4 the Ultimate in Mayonaka Arena (P4U), and Guilty Gear Accent Core Plus R (GGXXAC+R). All of these games involve stringing combos together in order to defeat your enemies as well as incorporating a lot of metagame strategies such as Okizeme and Bursting. For those unaware of these terms, an Okizeme comes from the Japanese word, “Attack” and “Wakeup.”

The basic gist of an Okizeme is attacking your opponent as they are getting off the ground after being knocked down. If successfully done, you are able to put pressure on your opponent or do mixups so that you can hopefully confuse your opponent into letting you get another combo in.

Bursting is a game mechanic in the 3 games where you will be able to interrupt your opponents attack and get them off of you, allowing you to recover and maybe even begin a counterattack. Bursts only come once a round though so players are careful when they use them because a good Burst can save your life. The use of a burst varies between the 3 games though. In BBCP there are now defensive and offensive bursts. Defensive bursts do what regular bursts do— they get the opponent off of you and put you back into a neutral state. 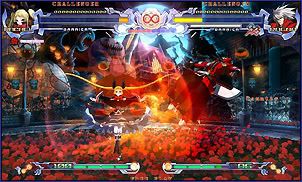 The offensive bursts though put you into “overdrive” which boosts your offensive capabilities making every attack you land deal more damage. In P4U, you can use bursts to continue combos, raise the damage of them, as well as use it as a defensive technique. But in all of these cases, you can only typically use your burst once a match. In both BBCP and P4U, the burst gauge slowly recovers during the match so it’s possible that you can use the burst twice a match. But usually bursts are saved until a crucial point in the match and therefore knowing when to burst is extremely crucial for victory.

Even if you’re walking into this live stream with little to no knowledge of fighting game terminology, you’ll still be inspired by the flashy combos, wondering when they will use their burst, and how the players will break through their opponent’s guard to get in some damage. So even if you just play casually or have no idea what these games are but have some kind of interest, you definitely won’t get bored of watching the matches.

4 new characters have been added to this version of Blazblue making the total character roster 23. The basic layout of BBCP is the same as any other fighting game out there. You have your special gauge that fills up every time you land an attack on your opponent. When your gauge fills up enough, usually to 50, you can your super moves and other things like rapid cancels. What separates Blazblue from the other games is that each character has their own “drive” which is performed just by pressing the “D” button. Drives are special moves that are used in the same way as regular moves but do different things than just normal attacks, so for instance, they can transform your character into a wolf like in Valkenhayn’s case or control the wind like in Rachel’s case.

CHARACTERS TO BE WARY OF

Both characters are considered to be the fastest in the game. With Valkenhayn’s drive, he can turn into a wolf and can change between attacking high, mid, or low, extremely quickly. Taokaka is a cat themed character and this is reflected in her playstyle which is more speed oriented. Her movements are very fast making her hard to catch and then her attacks also pack a punch making her a dangerous character to fight against. In both characters’ cases seeing a one sided match with them is not too unusual. Hakumen has really long reach and a drive that can be used to counter an enemy’s attack so even when guarding he can reverse an opponent’s pressure and turn it into his own. Hakumen has a special characteristic where instead of a normal special gauge, called Magatama. The Magatama fills up in two ways, either you can just let it fill up or use his drive and counter moves to do it. When the Magatama is full, you can use his special moves. Hakumen’s coolest moves are his powerful one hit moves especially when he is in overdrive and his damage is exponentially increased. When the screen turns black get excited for something cool.

1. Conan (Tsubaki): Winner of the 2011 GODSGARDEN. He worked hard and pushed his way to victory in the regional games and now faces towards the Arc Revolution Cup Finals. A smart and talented player, he’s definitely a player that everyone should watch out for.

2. Souji (Arakune): The winner of the national Blue Revolution Tournament and the overseas NEC tournament. At one point he mained Valkenhayn but then changed characters to Arakune. He is very skilled at not letting the opponent touch him at all.

3. “Amae I”(Rachel): A famous player even within the Gulity Gear community, previously using the name N-Otoko. He is a high level Rachel player who is great at overwhelming his opponents. Rachel players are rare thus not many players have strategies concerning her giving him a bit of an advantage in that regard. Look forward to his progress in this tournament!

PERSONA 4 THE ULTIMATE IN THE MAYONAKA ARENA

P4U incorporates both characters from Persona 4 and Persona 3 into one great fighting game. Characters in the Persona series fight by summoning their personas and the game reflects that. Each character has their own character specific persona attacks which can be used as easily as regular attacks. But if the opponent is able to hit your persona 4 times, your character will lose the ability to use their persona for a short time leaving you a little more vulnerable to attack. Using a persona to attack means that you will end up relying on it to do combos and the like that much more, but being able to use it opens up a lot of possibilities for attacks.

CHARACTERS TO WATCH OUT FOR Narukami, Mitsuru, and Chie are said to be the strongest characters in the game. Narukami has great anti-airs and good okizeme options with his persona. Mitsuru has good reach and strong attacks making any combo she lands not too difficult but high damage. Chie is very fast and she can get into the opponent’s range very easily making her a more rush down character. 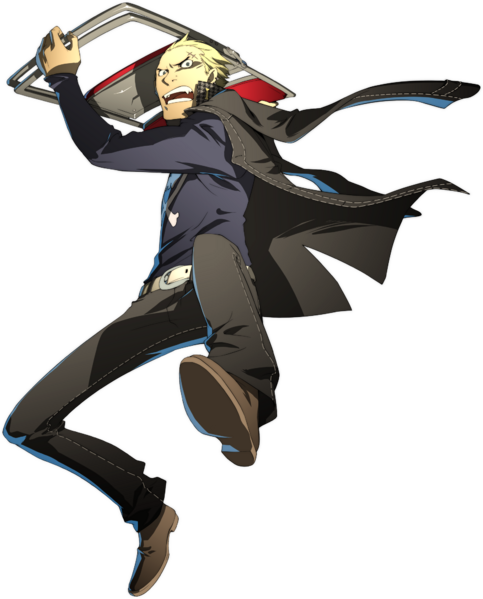 Kanji is a grappler character meaning that he focuses on throwing his enemies. This means at close range he is very deadly and if he grabs you, you’re in for a world of hurt. If you’re not careful, it’s possible that he could end the match in an instant.

1. DIE (Mitsuru): Among even the top players of Mitsuru, Die is considered one of the strongest. There might actually not be any player who can match his win-lose ratio. He could be this tournament’s overall favorite to win.

2. Yume (Aegis): Yume is a veteran of fighting games and thus has a lot of experience. He’s among the top Aegis users with a strong metagame that can easily overwhelm his opponents. Seeing him fight in this tournament will definitely be something worth watching.

3. Hae (Chie): The player who took second place in a 2012 tournament. Lots of great expectations have been placed in him after seeing his strong play style that is sure to take down even the strongest of foes.

Sporting 25 characters, a huge fan base, and many updates, Guilty Gear bosts being one of the longest played video game titles. The appeal of Guilty Gear lies in its fast paced action making every match exciting and interesting. The specialty of Guilty Gear lies in its Force Roman Cancel where the timing to use it is very strict (2-4 frames). If done correctly, the character will go back into a neutral state which will allow the player to continue combos that normally would not be able to be continued.

CHARACTERS TO WATCH OUT FOR 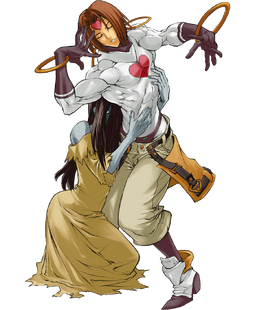 A character that is possessed by a myriad of spirits, all of which he can use to fight his enemies. In the game you can summon the power of 4 spirits but only use 1 at a time. The main strategy for all Zappa strategies is to summon and gain orbs. After Zappa gets 8 orbs, he can summon Raoh who inflicts heavy damage for about 15 seconds. Zappa is also a very fast character making him a force to be reckoned with. 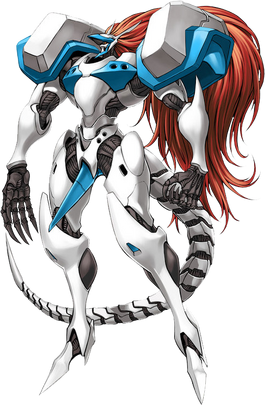 Tsujikawa is really the only person to use this character in tournaments. She cannot dash but she has a long reach and a lot of tools that she can use during the battle. Justice is also good at shutting down other characters making her a strong character when used by the right person.

PLAYERS TO WATCH OUT FOR

1. Eki (Zappa): The strongest Zappa in Kansai. He’s defeated almost every player in his way and quite quickly too making him the favorite to win the tournament

2. Woshige (Miria): Another great Kansai player. He’s very good at okizeme making him a difficult opponent to deal with. Utilizing Miria’s great speed he also makes it a point to not be touched by the opponent.

3. FAB (Potemkin): He is great at guarding and counter attacking. Potemkin is a very strong character so just a few combos can end the entire game. FAB is no stranger to this information and is sure to use Potemkins strengths to his advantages while watching out for his weaknesses.

Excited for the Arc Revolution Cup? Be sure to tune in to the NicoNico or twitch.tv stream, support your favorite players, and have a great time!

Two franchises we would never have thought would team up has finally teamed up! Yes

‘A Love Song to a Certain Pilot’ to receive anime adaptation